Philosophy and the New Physics – out of print in English but not in Greek !

Published in 1982 by Methuen, Philosophy and the New Physics quickly ran into a revised second edition in 1985, and was reprinted again by Routledge in 1991. It was translated into Japanese in 1990 and was updated for a Greek edition in 1995. It is now out of print in English. 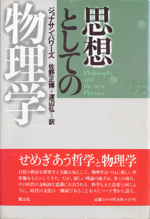