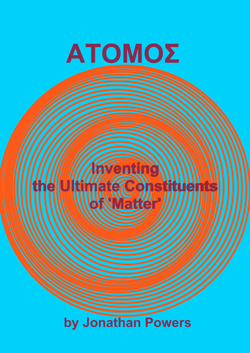 This monograph began life as an Appendix to the little book on the Many Blazing Worlds of Margaret Cavendish, stimulated by the thought that some of the images of her early idiosyncratic vitalist atomism and her later organicist holism could be used to illustrate ideas in modern physics ! This was intended as an antidote to the assumption that because she failed to influence the course of contemporary science what she said was of no significance. It was perhaps by ‘parking’ some of those issues, rather than answering them, that modern science was able to ‘plough ahead’.

This mini-monograph  is highly illustrated account of the search for ‘Nature’s Ultimate Building Blocks’ from the late 19th century onwards. Using diagrams to illustrate what cannot be literally visualised is slightly paradoxical, but  they offer the reader the opportunity to form a fairly sophisticated intuitive appreciation of contemporary physical theory. The fundamental point of the book is to show the conceptual strains to which the original simple mechanical idea of ‘the atom’ has been subjected.

Topics illustrated include Einstein’s photon theory of light; Rutherford’s discovery of the ‘nuclear’ atom; Bohr’s explanation of atomic spectra; the shock of discontinuous change; the difficulty of making sense of wave-particle ‘duality’; the problem of individuality in relation to ‘ultimate entities’; the concept of ‘quantum spin’; non-locality and the explanation of chemical bonding and crystal structures; the underlying structure of the periodic table of the elements; radioactive decay; the stellar genesis of the elements by fusion; nuclear models and the explanation of fission; why Dirac’s relativistic wave equation requires ‘spin’ and ‘anti-matter’; the discovery of the neutrino family; the breakdown of parity and the search for fundamental symmetries; the interpretation of Heisenberg’s Principle; the use of Feynman diagrams to understand interactions; the explanation of ranges of subatomic particles families by ‘Quarks’ and the problem this poses for the idea of a ‘building-block’; ‘mass’ as a product of interaction; the discovery  the Higgs boson; the fundamental ‘mysteries’ of quantum mechanics – duality, indeterminacy, non-locality, superposition, and entanglement.

The concludes with reference to contemporary competing strategies for taking forward a Grand Unification of Physics, but asks whether that goal is achievable without an understanding of how it has been possible for conscious beings to evolve capable of inventing such strategies.