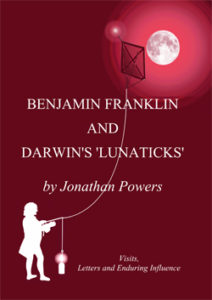 Benjamin Franklin (1706-90) was the most glamorous scientific figure of the 18th century after Isaac Newton. Having made his fortune as a writer and publisher, he retired to explore the emerging new science of ‘electricity’. His discoveries led to the conferment of Doctorates by the University of St Andrews and Oxford University, as well as his election as the first-ever overseas Fellow of the Royal Society and the award of its prestigious Copley Medal. It was his demonstration that lightning was electrical and the invention of the lightning conductor which captured the public imagination but, in the investigations described in this mini-monograph, he also introduced terminology which is still in everyday use.

His first excursion in 1758 seems to have been instrumental is stimulating the formation of the ‘Lunar Circle’, which was put onto to a more organised footing in 1766, after Franklin had introduced Dr William Small from William and Mary College to Matthew Boulton in Birmingham. This mini-monograph gives a detailed account of Franklin’s journeys in England, Scotland, Ireland, and on the mainland of Europe, and shows how the shared interests and attitudes of a network of friends spanning the Atlantic helped to shape the modern world.

This monograph was developed from an article in the Franklin Gazette by the author in 2004, and lectures by him in 2006 to mark the 300th Anniversary of Franklin’s birth. These lectures  were delivered at the Derby Local Studies Library and in Ecton (the birthplace of Franklin’s father) to a visiting party of the Friends of Franklin from Philadelphia.

This new edition is updated following a further lecture on Franklin at Erasmus Darwin House during their ‘Year of Lunarcy’ in 2016, which marked the 250th anniversary of Dr William Small taking over the organisation of ‘the Lunar Society’. The additions include an account of Franklin’s experimental investigation on canal transport and his attempts in Lichfield and Birmingham to isolate inflammable ‘marsh gas’. Though this attempt failed, the publication of his account in Priestley’s ‘Experiments and Observations on Different Kinds of Air’ led to the subsequent discovery of methane.