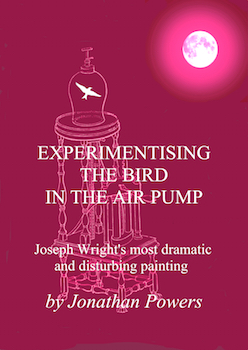 Joseph Wright’s  Experiment on a Bird in the Air Pump is probably the most dramatic and disturbing painting he ever created. The wild-eyed lecturer fixes us with his gaze, asking us whether we want to see how much longer the bird can survive. However it is not a photograph but a purposively contrived and complex picture. Initially Wright failed to sell, it but then agreed a secret, cut-price deal with a friend.

This mini-monograph examines the background to the use of living creatures in Air Pump experiments from the time of Robert Boyle onwards. Experimental demonstrations by roving lecturers played an important role  in creating the ‘public sphere’ of science in the 18th century – not only bringing scientific ideas to the wider public, but showing  the new way of establishing ‘authority’.  Air Pump demonstrations were ubiquitous but some felt the use of live creatures was unacceptable and a ‘Lungs glass’ was invented to accommodate their reactions. However this device gave an incorrect understanding of what happens to an asphyxiated creature.

Wright’s original Sketch has survived on the back of a self-portrait he gave to two of the people featured in the painting. The differences from the final painting are very significant, and suggest a modified ‘story’ for what lies behind the event depicted. There are surprising associations of the picture’s eventual purchaser, and a darkened church tower just visible through the window provide a clue to the possible location and hence the identity of the participants. The destruction of potentially relevant records and papers prevents a definitive conclusion either way, but the search reveals previously unsuspected social connections.

This mini-monograph is developed from a lecture given by Professor Powers at the Derby Museum and Art Gallery on 18th March 2017.

Many colour and b/w illustrations