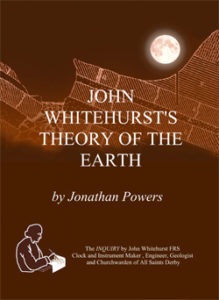 John Whitehurst of Derby is best known today as a maker of clocks and other fine instruments, which command high prices at auction. But as befits a founder member of the famous ‘Lunar Society’ he had wide ranging interests including expertise in hydraulics which led to an involvement with the regional mining industry.

This mini-monograph provides the first examination of the development of Whitehurst’s geological ideas from an incomplete early draft of 1763 (found among Benjamin Franklin’s papers), through to the second edition of the book in 1786. It examines both Whitehurst’s struggle to reconcile his geological discoveries with a literal reading of the Book of Genesis, and his pioneering work in ‘subterranean geography’ (i.e. stratigraphy) which led to his election as a Fellow of the Royal Society.

Unlike the other volumes in this Series, this monograph has not been developed from a prior public lecture by the author, but was instead stimulated by a talk in Derby Cathedral in 2013 to mark the 300th Anniversary of Whitehurst’s birth which was given by Dr Maxwell Craven, his principal biographer. Originally intended as a ‘footnote’ to Max Craven’s work, this little book shows that, despite the constraints imposed by his conservative theology, Whitehurst had a more significant role in the development of modern Geology than is usually realised.  (Inter alia, this monograph fills in a episode which is missing from the standard accounts of the life of Dr James Hutton of Edinburgh, who is widely regarded as ‘the Father of Modern Geology’.)