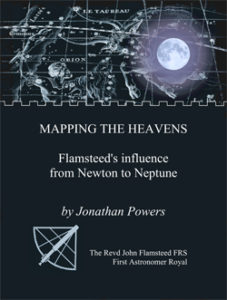 John Flamsteed (1646-1719) was the first Astronomer Royal. He came from Derby though he was born in nearby Denby because of the plague. Flamsteed became the country’s first professional astronomer. This official investment in astronomy resulted from the need to solve the practical problem of determining longitude at sea. As a maritime nation with a global reach, this was of vital national interest to Britain.

Using specially constructed instruments, incorporating telescopes, he mapped the positions of over three thousand stars, and tracked the movements of the Moon and planets with unprecedented accuracy over a period of fifty years. Originally he argued that the Meridian should be drawn through Derby, since it was ‘in the navel of the Kingdom’. This mini-monograph shows the position of the proposed Meridiem Derbiensis, explains some of the challenges of observational astronomy, and provides diagrams of the instruments he constructed, which were lost after his death.

His relationship with his contemporary, the imperious Isaac Newton, became very difficult, but nonetheless Flamsteed’s observations provided vital data for Newton’s greatest work. Remarkably Flamsteed’s original observations were still of importance and interest in the mid 19th century, when it was realised that he had unwittingly observed the planet Uranus four times before it was officially ‘discovered’ by William Herschel in 1781. This mini-monograph explains how the apparently uncharacteristic inaccuracy of these observations by Flamsteed provided clues which led to discovery of Neptune.

The latter was the theme of a lecture given by the author during the weeklong Flamsteed Festival which he organised at the University of Derby in 1996 to mark the 350th Anniversary of Flamsteed’s birth. This lecture provided a link to the interleaved series of talks organised by the Derby and District Astronomical Society to mark the 150th Anniversary of the Discovery of Neptune.

These ‘Enlightenment Mini-Monographs’ have been specially written and published for the benefit of the Derby Museum and Art Gallery, and other regional cultural charities such as Erasmus Darwin House in Lichfield. They may be purchased at these venues or on-line as below. The author is Professor Emeritus Jonathan Powers DL DUniv. These little books all contain some new and original material not to be found elsewhere.