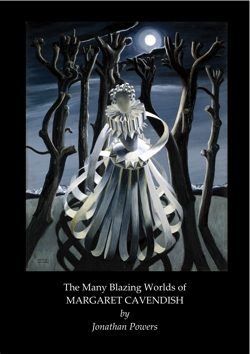 Margaret Cavendish (1623-1673) was both the most prolific and the most diverse female writer of the seventeenth century. In addition to biography, poetry, plays, and an early science fiction novel, she wrote on politics and produced five original works on ‘natural and experimental philosophy’. Indeed she was the only woman to attend a meeting of the Royal Society in that period – at what was, not coincidentally, its best-attended meeting of the century! She compensated for her lack of formal education by giving full reign to her vivid imagination and sharp intelligence. She explicitly sought ‘a glorious fame’ through her writings – latterly penned in the Little Castle at Bolsover – but for all their obvious fascination and overt flattery, her contemporaries mostly did not take her seriously. In later times to those who did not bother to try to understand her, she simply became ‘Mad Madge’.

Her family (the Lucases) lost everything in the English Civil War, but having fled to Paris with queen Henrietta Maria as a Maid of Honour, she met and fell in love with the archetypal ‘Cavalier’, William Cavendish, whose forces had been destroyed at the Battle of Marston Moor. After the Restoration he was elevated to a Dukedom, and so Margaret became ‘Duchess of Newcastle’. Innately shy, she used distinctive fashion to project herself flamboyantly. (The cover picture of L’Infante Egarée by the Derby surrealist artist Marion Adnams was chosen as representing something of Margaret Cavendish’s inner character in facing an uncomprehending world.)

This mini-monograph puts her story  into its turbulent political context and  contrasts her ideas with those of her contemporaries such as Pierre Gassendi, Réne Descartes, Kenelm Digby, Jan Baptist van Helmont, Thomas Hobbes,Walter Charlton, and Joseph Glanville, most of whom she had met. Her venture  into ‘science fiction’, can be seen partly as a defiant feminist counter-blast against some of the entrenched prejudices of her times. The book leaves the reader with the question, now that the  ‘Mechanical Philosophy’ has run its course, whether her attempt to forge an alternative approach to the understanding of Nature and ourselves carries the seeds of a new way forward.