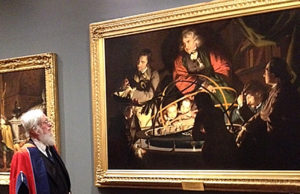 It features the series of ‘mini-monographs’ on Enlightenment figures which I’ve been writing to support Derby Museum and Art Gallery and Erasmus Darwin House in Lichfield. (Some of them have also been on sale at Derby Cathedral, Chatsworth House, and the Buxton Museum.)

The first five are already into their second editions, despite sales having relied previously just on ‘passing trade’. People have commented that these little books should be more widely available since, though the pretext for writing them has been that they had connections with Derbyshire, the people I discuss are of world significance.

It is an interesting discipline to be limited to the number of pages which can be made into a stapled booklet. This keeps the cost down, even in full colour. One has to write to fit the page (including illustrations and footnotes) and the total number of pages has to be a multiple of four.

They have all involved voyages of discovery for me and all of them contain at least something you will not find anywhere else. It would have been easy to turn them into full-sized books – without actually adding any content ! – but the idea is that they would be so cheap as to be irresistible.

And in any case the profits go to support the work of important cultural charities. So do have a look !
Jonathan Powers