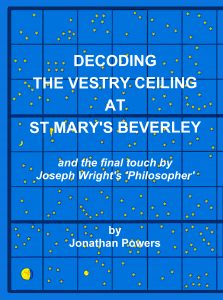 This pamphlet was originally intended as an Appendix to The Philosopher Lecturing on the Orrery in this series, but it has taken on a life of its own. The author’s pilgrimage to visit the lasting resting place of John Arden (Joseph Wright’s ‘Philosopher’) led him to encounter the extraordinary celestial ceiling of the Vestry (formerly the Chapel of the Holy Trinity) in St Mary’s Church in Beverley. The ceiling was originally painted in the mid 1520s, during the rebuilding of the Church following the catastrophic collapse of its central tower during Divine Service on 29th April 1520 (Julian Calendar). However it shows three significant anachronisms. Detailed astronomical analysis has enabled the identification of four stages in its development, dated to precise festivals in 1526 and 1557, with later modifications in 1771/2 and 1782, responsibility for which can be laid at the feet of John Arden.

Inter alia these changes track the significance of the Mediaeval Catholic Cult of the Blessed Virgin Mary, both in the orientation of the Church and the design of the ceiling; the impact of the Protestant Reformation in the time of Edward VI; the additions to the ceiling celebrating of the return of elements of Catholic sacramentalism during the Marian Reaction; the fundamental change in the way the ceiling was viewed during the Enlightenment, explaining the final amendments.

This is an adjunct to the Enlightenment Series authored by Professor Emeritus Jonathan Powers DL DUniv FInstP FRSA. These little books all contain some new and original material not to be found elsewhere. They are published to support the work of relevant regional cultural organisations. It is hoped that this pamphlet will also be made available in Beverley, and perhaps raise awareness of surprising historical connections with Derby.

You may manage your subscription options from your profile